Summary of work done during GSoC

Tuesday, August 29, 2017
GSoC17 is at the end and I want to thank my mentors and the Octave community for giving me the opportunity to participate in this unique experience.

During this Google Summer of Code, my goal was to implement from scratch the Convolutional Neural Networks package for GNU Octave. It  will be integrated with the already existing nnet package.

This was a very interesting project and a stimulating experience for both the implemented code and the theoretical base behind the algorithms treated. A part has been implemented in Octave and an other part in Python using the Tensorflow API.

All the code implemented during these months can be found in my public repository:

Since I implemented a completely new part of the package, I pushed the entire project in three commits and I wait for the community approving for preparing a PR for the official package [1].

The first commit (ade115a, [2]) contains the layers. There is a class for each layer, with a corresponding function which calls the constructor. All the layers inherit from a Layer class which lets the user create a layers concatenation, that is the network architecture. Layers have several parameters, for which I have guaranteed the compatibility with Matlab [3].


The second commit (479ecc5 [4]) is about the Python part, including an init file checking the Tensorflow installation. I implemented a Python module, TFintefrace, which includes:

I did not manage to implement some features because of the lack of time due to the bug fixing in the last period. The problem was the conspicuous time spent testing the algorithms (because of the different random generators between Matlab, Octave and Python/Tensorflow). I will work in the next weeks to implement the missing features and I plan to continue to contribute to maintaining this package to keep it up to date with both Tensorflow new versions and Matlab new feature.

Tutorial for testing the package

Popular posts from this blog 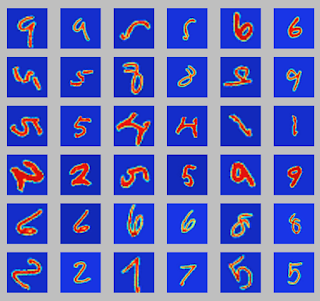 Hello, I spent the last period working mostly on Tensorflow, studying the APIs and writing some examples in order to explore the possible implementations of neural networks. For this goal, I chose an interesting example proposed in the Matlab examples at [1]. The dataset is composed by 5000 images, rotated by an angle α, and a corresponding integer label (the rotation angle α). The goal is to make a regression to predict the angle of a rotated image and straighten it up. All files can be found in  tests/examples/cnn_linear_model  in my repo [2]. I have kept the structure as in the Matlab example, but I generated a new dataset starting from LeCun's MNIST digits (datasets at [3]). Each image was rotated by a random angle between 0° and 70°, in order to keep the right orientation of the digits (code in dataset_generation.m ). In Fig. 1 some rotated digits with the corresponding original digits. Figure 1. rotated images in columns 1,3,5 and originals in columns 2,4,6
Read more

Hi there, the second part of the project is finishing. This period was quite interesting because I had to dive into the theory behind Neural Networks  In particular [1], [2], [3] and [4] were very useful and I will sum up some concepts here below. On the other hand,  coding became more challenging and t he focus was on the python layer and in particular the way to structure the class in order to make everything scalable and generalizable. Summarizing the situation, in the first period I implemented all the Octave classes for the user interface. Those are Matlab compatible and they call some Python function in a seamless way. On the Python side, the TensorFlow API is used to build the graph of the Neural Network and perform training, evaluation and prediction. I implemented the three core functions: trainNetwork, SeriesNetwork and trainingOptions. To do this, I used a Python class in which I initialize an object with the graph of the network and I store this object as attribute of S
Read more